How to identify the hop count and route of a packet in NetSim? Print

In NetSim, the route taken by a packet and the hop count can be easily identified using the Packet Trace log file and the Packet Animation.

Packet animation enables users to watch traffic flow through the network for in-depth visualization and analysis. Users have the following options before running a simulation:

The packet trace is written whenever a packet is received at a device.

For example, if we have transmission N1 -> N2 -> N3, then the packet trace is written for every packet being received at N2 and at N3. Note that it is not written for every packet being transmitted by N1 and subsequently by N2. This means that packets which are transmitted from N1 but which may have been errored or collided before being received by N2 are not written in the packet trace. 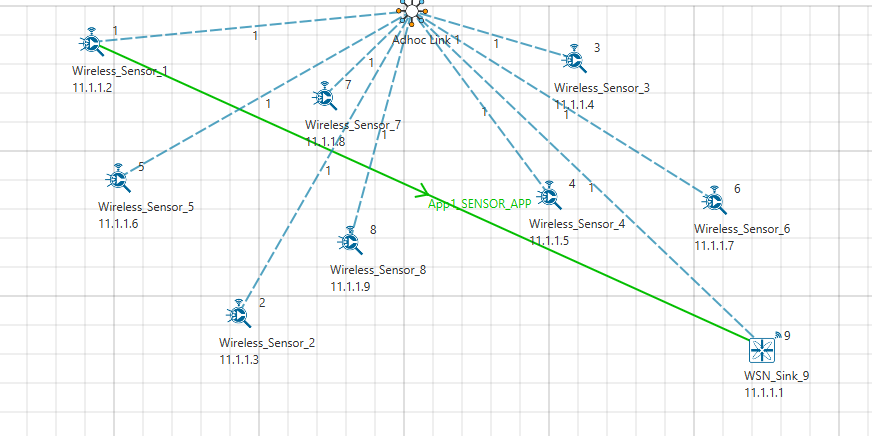 The scenario has been simulated for 100s with Packet Trace enabled.

The route of a packet can be observed from both the Animation window and the Packet Trace file.

In the Animation window, you can see the flow of Data Packets (the green-colored packets) as follows:

2. The packet is then sent to Wireless_Sensor_7, then further from Sensor_6, it goes to Sensor_8, then to Sensor_4 and finally reaches the destination, i.e. the Sink node

Similarly, in the Packet Trace file, filter and select a specific PACKET_ID to trace the path through which the packet was sent.

Hop count of packets can also conveniently be obtained from the packet trace file.

The route of a packet and the hop count can be identified for other networks such as MANET, VANET, IoT, etc. in a similar way.