How to add spurious noise in 5G-NR Print 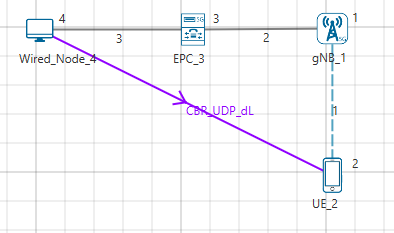 1. Configure the properties as shown in the table below:

3. Configure 2 Downlink applications with source node as 4 destination node as 2. Set the Transport Protocol to UDP in both the applications along with other settings given in the table below:

4. Run simulation for 1.1 sec. After the simulation completes note down the throughput from the application metrics table which is part of the results dashboard.

The source code of the LTENR_PHY.c file which is part of the LTE_NR source code project is modified as shown below (changes highlighted in red):

Upon analyzing the impact of spurious noise on the Throughput and SNR,

We can see that as spurious noise increases throughput and SNR drops accordingly.