From NetSim v12.2 onwards, the networks LTE Femtocell, LTE D2D and LTE VANETs have been removed as the source codes for LTE and 5G NR were merged 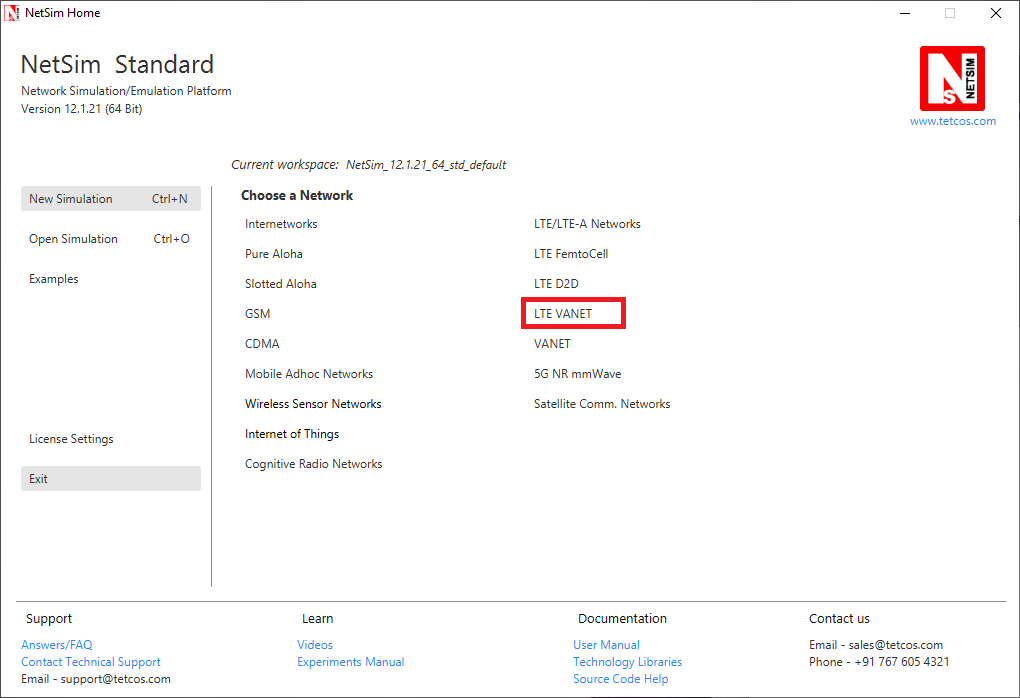 Steps for setting up NetSim:

Vehicular simulations can be performed easily in the LTE module in NetSim v10.2 with a few customization done to the underlying Property.xml file. A modified Property.xml file is attached with this article.

5. Click on Environment Settings button and set the Grid Length as per the grid area in SUMO configuration created: 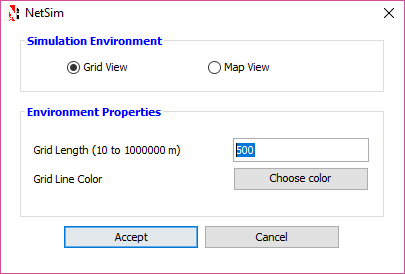 6. Create a simple network scenario by placing MME and ENB's in the environment. Drop UE's equal to the number of vehicles present in the SUMO configuration to be used.

7. Place the UE's in the GUI as per the number of vehicles you have configured in SUMO. The UE's can also be placed in the GUI randomly, since initial positions and movement will be as per the device placement and routes taken, in SUMO. 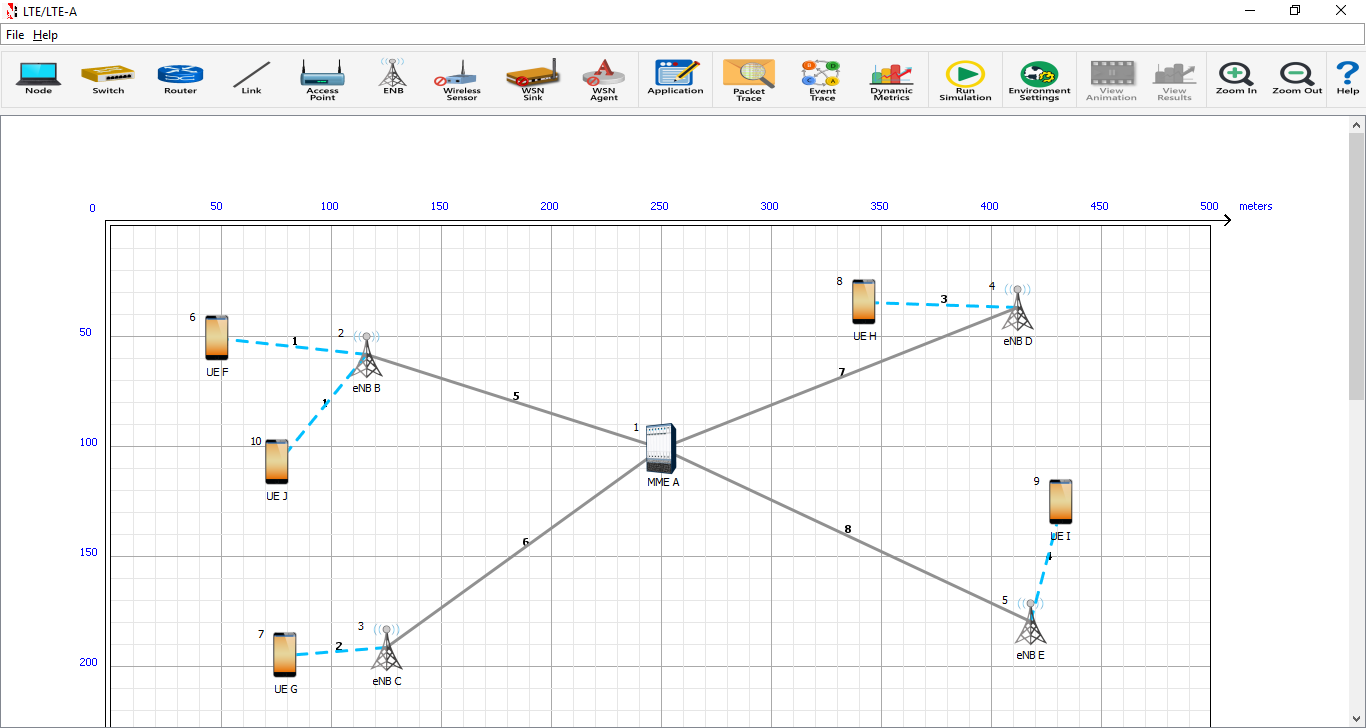 8. Device icons can be changed optionally to make it more realistic. To change icons right click on any device and select Change Icon. NetSim supports any jpe, jpeg or png images as icons. 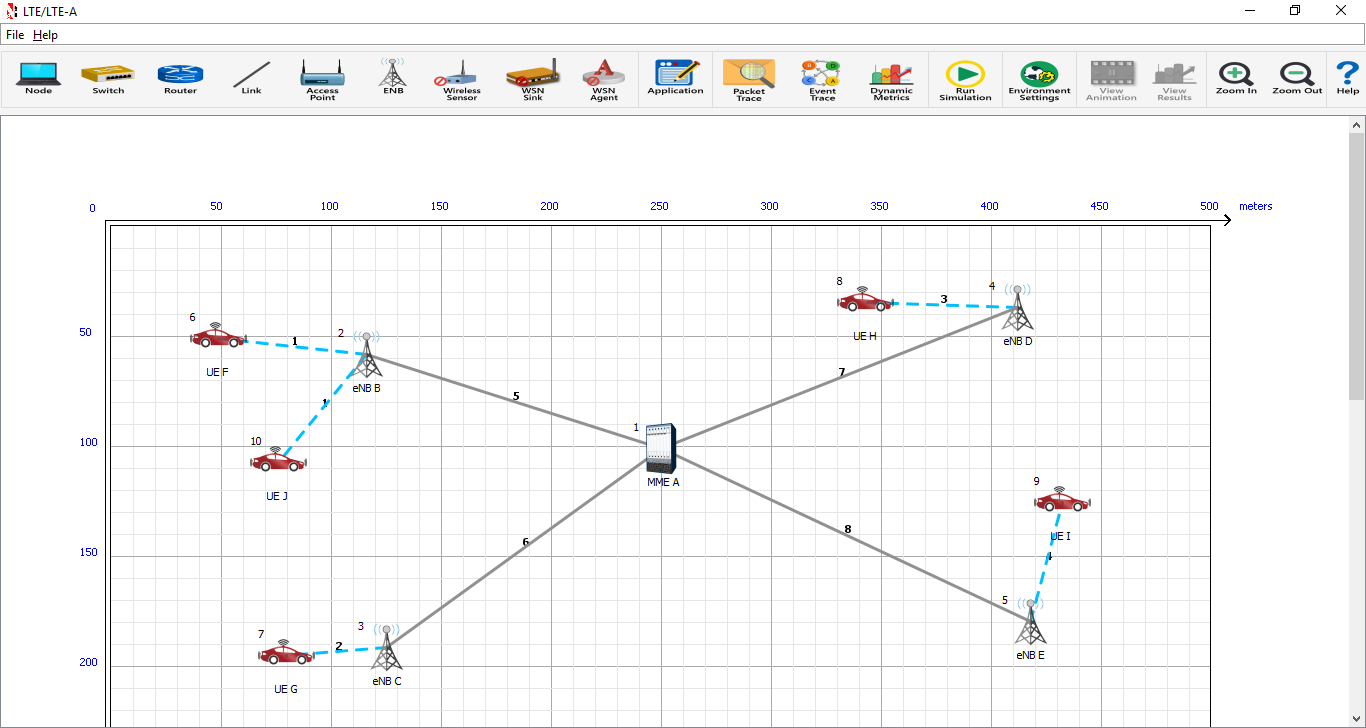 9. Right click on any device and select properties. In the Under General Properties set the Mobility_Model as SUMO. Set the path of SUMO Configuration (sumo.cfg) file along with the file name in the Sumo File text box. In the Device_Name text box enter the vehicle name as per the vehicle id configured in the sumo routes file (rou.xml) file. Vehicle ID's will generally be like V0, V1, V2 etc.  Do this for all devices that were dropped. 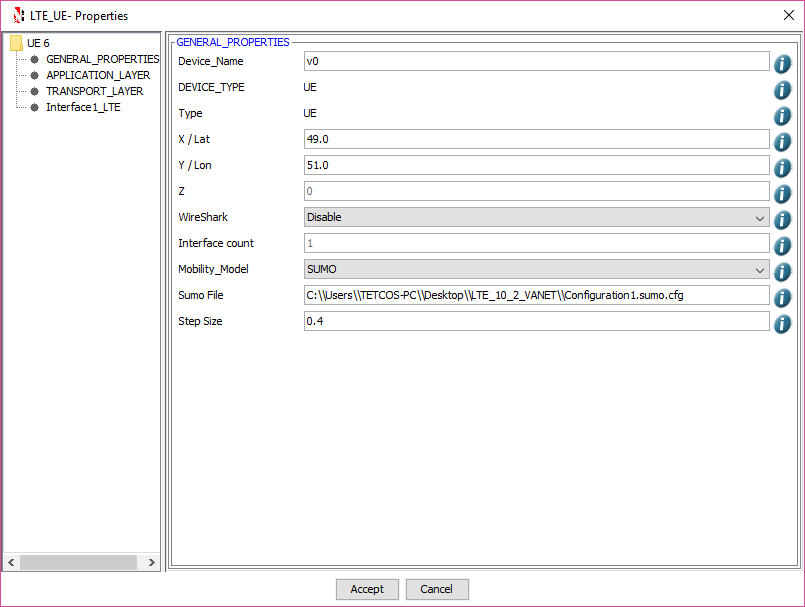 11. Click and drop application icon and select properties after right clicking on it. Configure traffic between the vehicles as per your requirement. 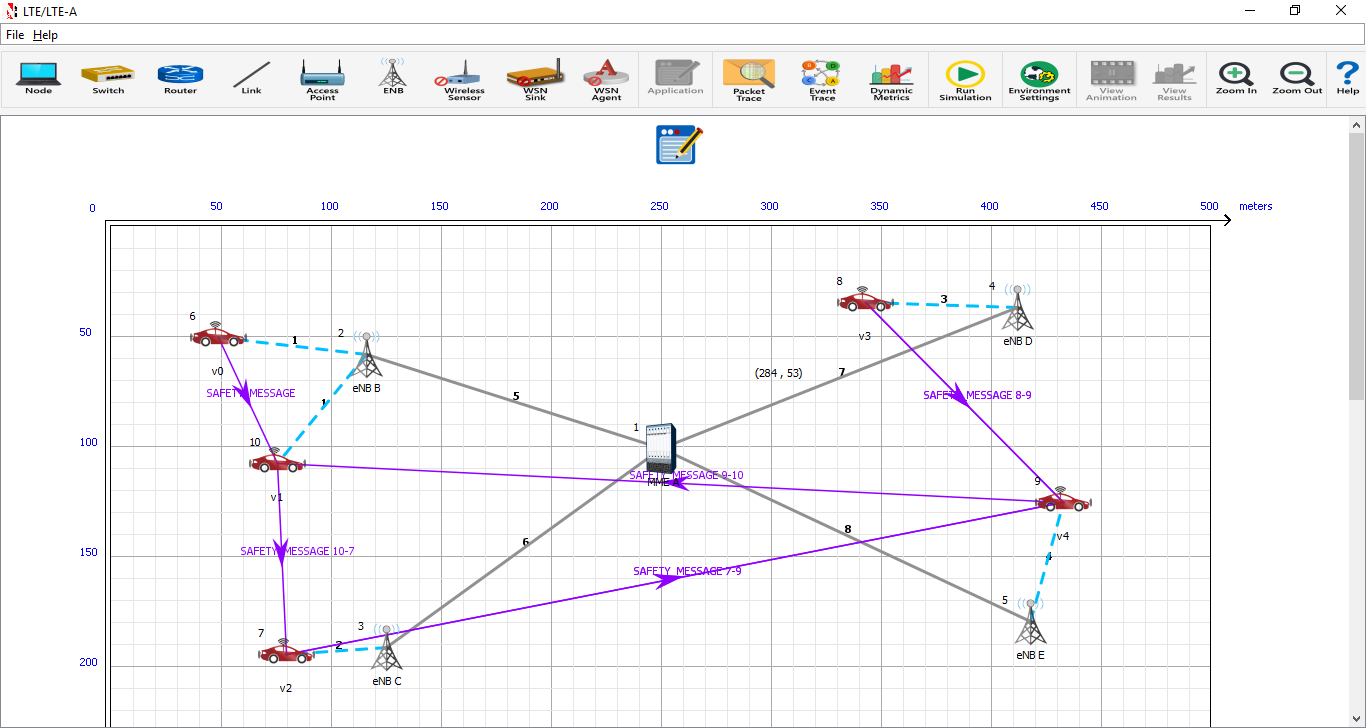 13. Click on Run Simulation button.  It is preferable to specify the simulation time less than or equal to the end time specified in sumo configuration (sumo.cfg) file.

14. As simulation starts SUMO interface(Vanet.exe) command line will be initialized in parallel and will be displaying the step calculations done in SUMO during runtime. SUMO interface window will be terminated before simulation in NetSim is over, since SUMO takes care of road traffic conditions whereas NetSim takes care of the Network Communication and instantiates the TCP/IP stack for each device taking part in the simulation. 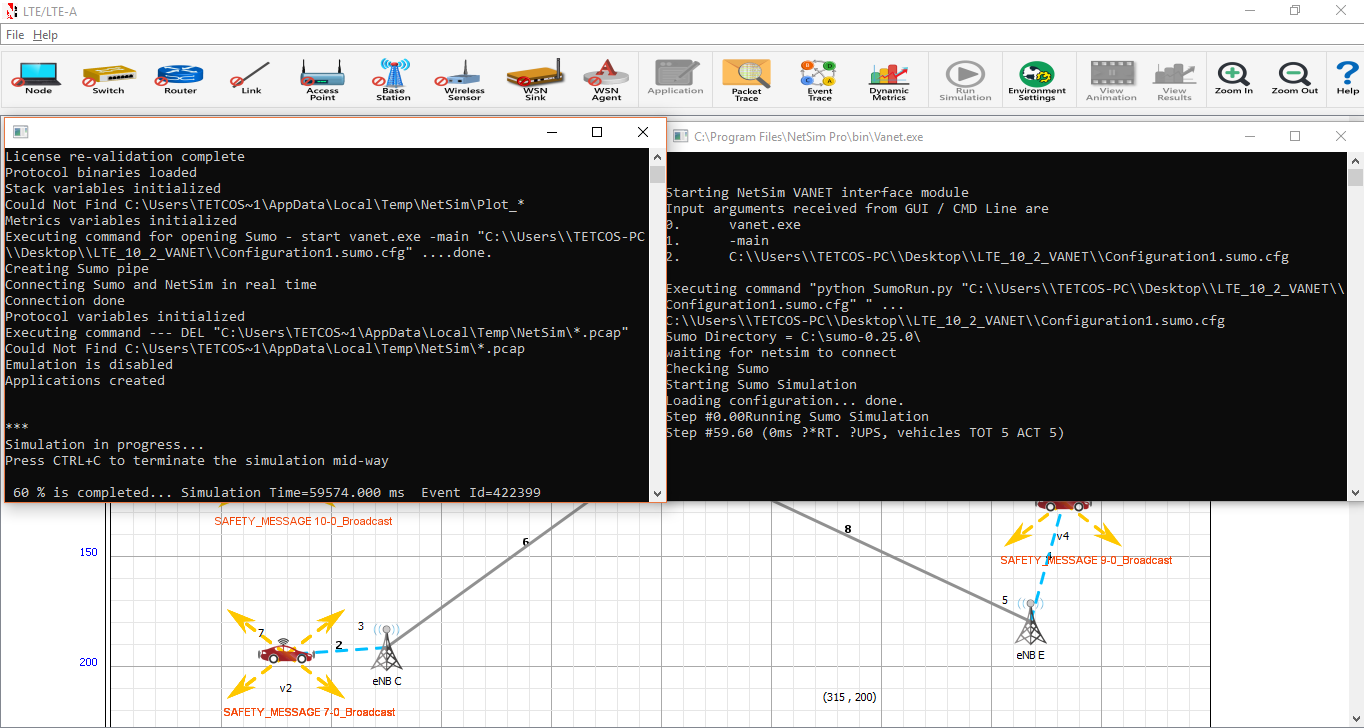 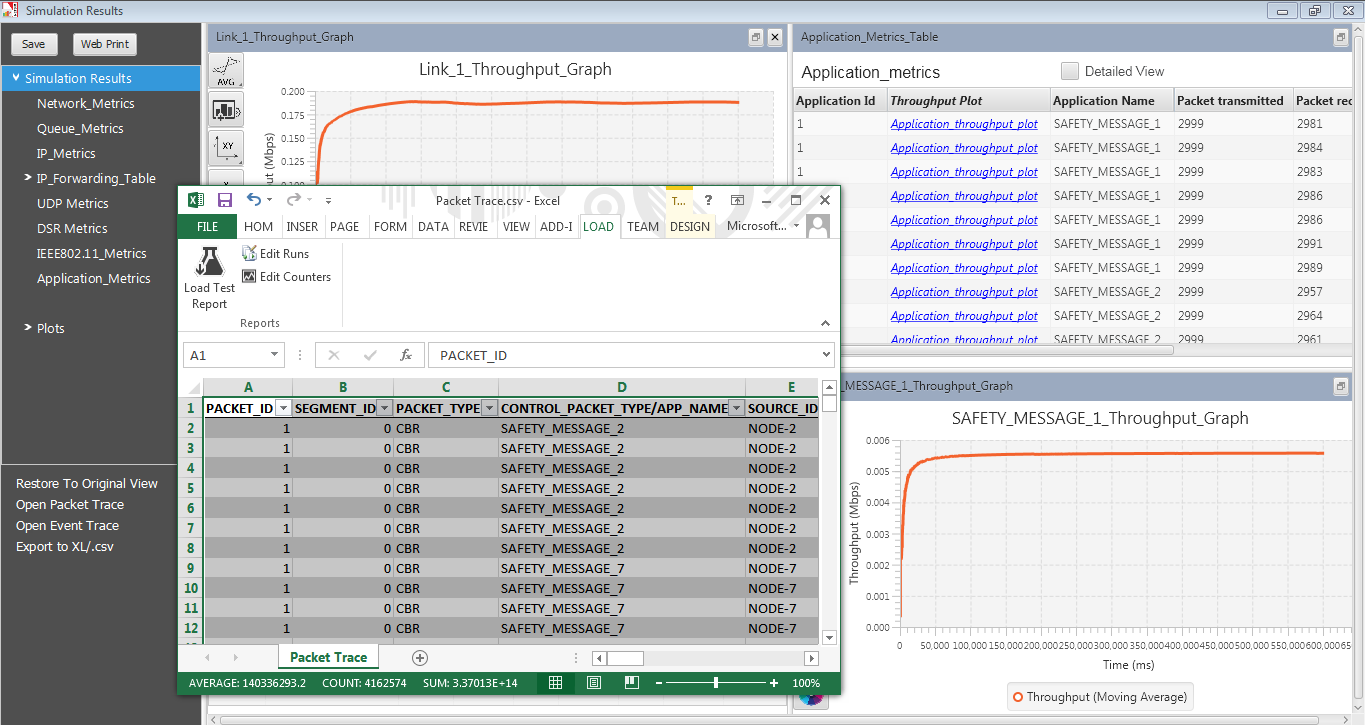 16.  To visualize vehicular movement and road placement during runtime, run the simulation with Play & record animation option selected. NetSim animation window will appear at the start of the simulation. 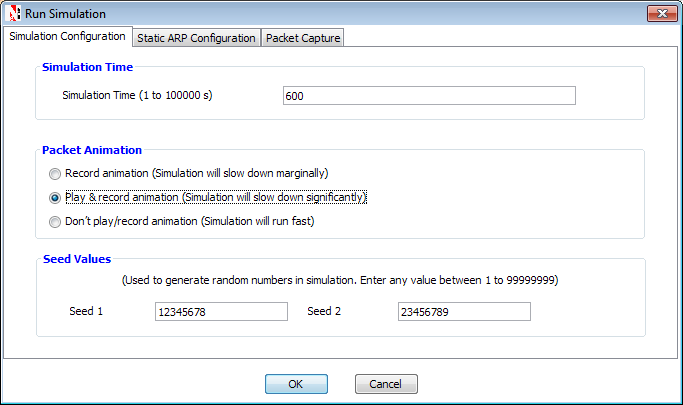 17. Now in addition to the SUMO Interfacing console, SUMO-GUI will be loaded in parallel. Vehicular movement can be visualized here by configuring the coloring schemes for better visibility. The following window can be obtained by clicking on the colored palette just before the camera icon. Under vehicles, set Show As to 'simple shapes' and set Exaggerate by to 5 or any other value as per your preference and click on Use button. 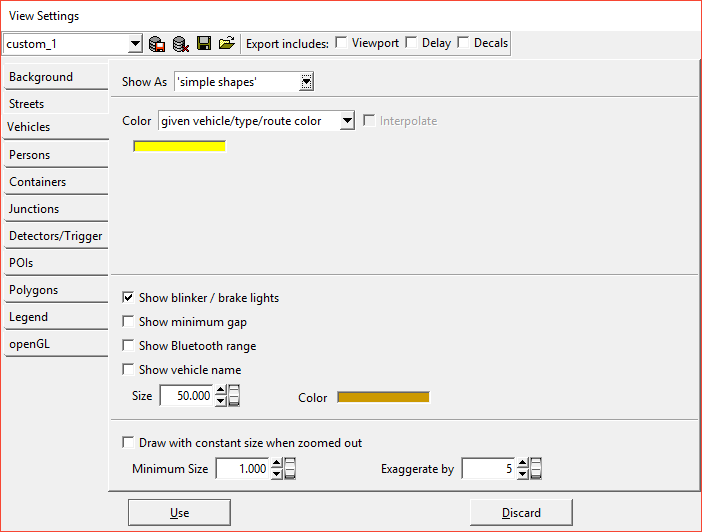 18. You will now start seeing vehicle movement in SUMO-GUI as per the number of vehicles, departure time and routes configured in the routes (rou.xml)file. You can zoom in and out and move the map regions to visualize it better. 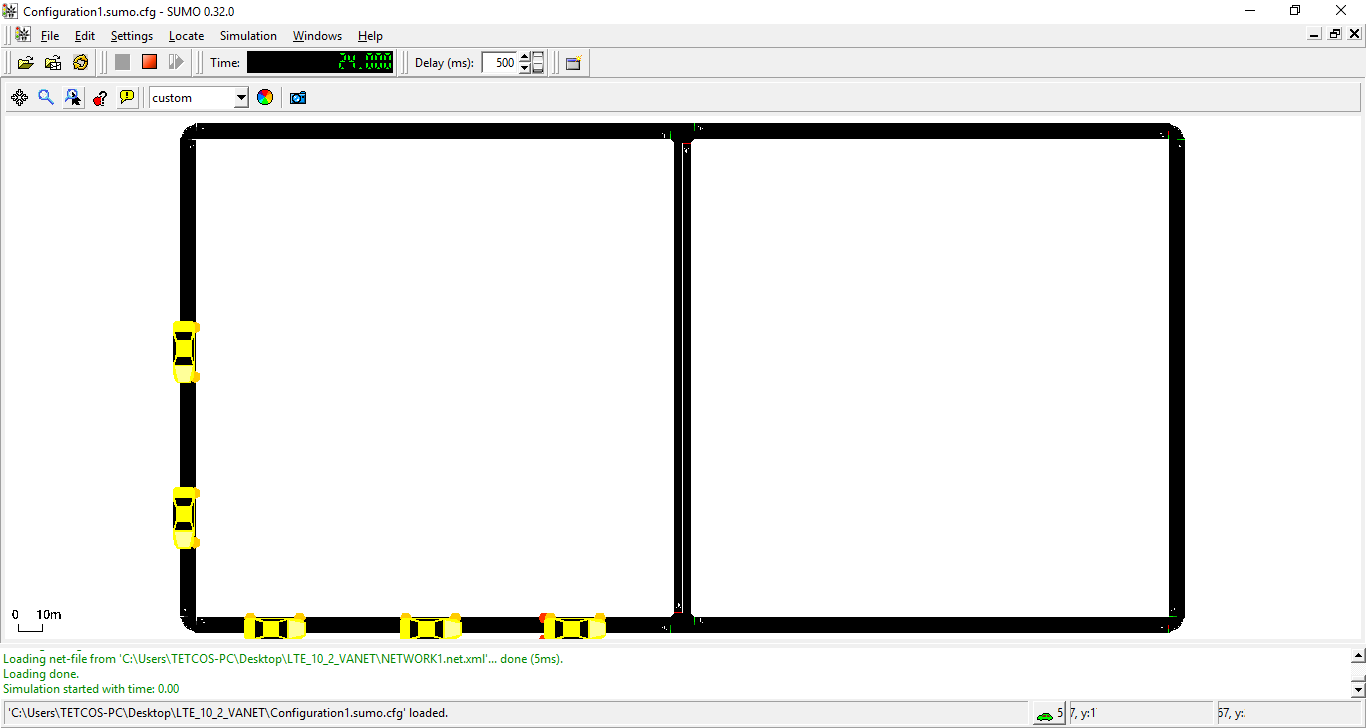 19. Once simulation ends in NetSim, SUMO GUI termination command will be initiated, which will stop the animation in SUMO. NetSim animation window which appears at the end of the simulation can be used to visualize packet flow and vehicular mobility along with other interesting features.

For further reference and documentation related to SUMO visit: http://sumo.dlr.de/wiki/Simulation_of_Urban_MObility_-_Wiki

xml
Property.xml
(1.82 MB)
N
NetSim is the author of this solution article.